Millennials came of age in an era of unhealthy beauty standards.

When I was young, I idolized the models who graced the glossy pages of the top teen magazines. The quizzes, romance advice, and beauty tips that made up these pages played a crucial role in my formative years as a teen. They also had a tremendous influence on my own body image and self-esteem, even if I wasn’t aware of it at the time.

When I think back to the pages of those magazines, the contents were largely devoted to how I could improve or better my appearance, including articles relating to dieting and weight loss. Western beauty standards have typically centered (almost exclusively) around thin, healthy-looking white women, which as I grew up, made me feel like I was never good enough, pretty enough, or thin enough to be important or valued in the world.

This is why I’m so eager to see more brands rejecting those old, narrow ideals of beauty in the industry. As more and more people begin to talk about the ideal of beauty and what that means, millennials like me, and Gen Z consumers starting to harness their own purchasing power want to see brands, advertisers and media representing all body types, skin tones, gender identities or abilities. Simply put - visibility and representation matter.

Generation Z now has access to a world of social issues at their fingertips, thanks to the blurring of IRL and URL experiences. The body positivity movement was born out of fat activism and has grown to encompass everything from acne to scars and everything between. It has slowly seen itself extending from counterculture into mainstream media, advertising, and pop culture.

Hashtags have infiltrated places like Instagram and Wattpad touting #FreeYourBody or #EffYourBeautyStandards. Body image activists have also created spaces online for people to come together to feel represented and showcase that they matter.

We're also starting to see global, mainstream brands make changes in how they showcase beauty. For example, skincare brand Olay said it will stop retouching skin in its advertising by 2021.

Gender neutral is anything but (neutral)

Isabella Giancarlo, co-founder, and creative director wanted Fluide to be the make-up brand that took gender-neutral makeup one step further. The brand is owned and operated by the LGBTQIA community, for the LGBTQIA community and works exclusively with LGBTQIA identified models and photographers. Take a look at any of their sales and marketing, you’ll see that they’ve broken outside the paradigm of Western beauty standards and taken back what it means to empower.

Self-expression is for everyone

For many people, specifically, those in Gen Z, self-expression impacts the way we look and feel about ourselves, but also determines who we are and who we want to be. The more that a brand is socially aware, the better it reflects on a company’s public image.

People want to do business with brands they feel represent them, and one such brand has been Girlfriend Collective, a Seattle based athleisure startup.

The brand became popular for its fashionable upcycled leggings, which are made from recycled plastic water bottles. When they first launched, their leggings initially ranged from XXS-3XL, a rarity for an activewear brand. But in December 2018, the brand announced they would not only be expanding their size range up to 6XL, but they launched an entire advertising push (online and in-print) featuring plus-size bloggers and influencers. To date, on their Instagram grid, they have featured Corissa of Fat Girl Flow and Rosey Blair and not only has the response been positive, but it has captured them a brand-new audience. Gen Z is listening to these types of bold moves, and guess what? They are responding with their pocketbooks.

Gen Z is one who craves authenticity and for brands attempting to influence consumers with buzz words and faux-body positivity, they will see right through it. The biggest things that both Fluide and Girlfriend Collective have succeeded in is the understanding that body image has an internal effect and external effect on people. There needs to be a systemic shift— operating under one ideal of beauty isn’t an option. Brands need to be fearless instead of making excuses as to why they can’t feature more models of different ages, genders, sizes, and abilities.

We know Gen Z is also passionate about community activism, as we saw recently on Wattpad when we launched a global writing contest with National Geographic to raise awareness of the plastic crisis. The campaign generated thousands of story entries that promoted environmental activism.

Go beyond representation—make an impact 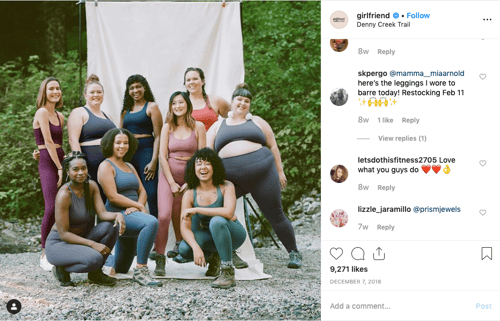 By 2020 Generation Z will account for 40% of all consumers, and want to make a difference in the world—76% are concerned about humanity's impact on the planet. Body positivity started as an anti-capitalist ideology against the diet industry. So if brands want to continue to empower by featuring all bodies, they should also give back to the communities they are serving as they have a corporate interest in making body positivity a lasting commitment. Fluide donates five percent of all profits to a rotating roster of LGBTQIA community organizations, whereas Girlfriend Collective (whose manufacturing production facility) is based out of Taiwan and they start pay at 125% of the local minimum wage, provide free catered meals, free health check-ups for every employee every six months, as well as free health insurance.

Check out how #FreeYourBody started by a Gen Z writer grew into a movement that celebrates diversity on Wattpad.

At the end of the day, it’s about feeling good about ourselves

The fact is, a lot of people are tired of feeling bad about themselves. So rather than being performative, let’s try to approach how we break down these barriers in a smart and inclusive way. Reach Gen Z of all identities and sizes by working within these communities  to make society a better place to be. Your audience will thank you. And so will I.

Want a deep dive into Gen Z? Download our Gen Z Census report by clicking below.