This Is What the Gen Z LGBTQIA+ Community Actually Wants 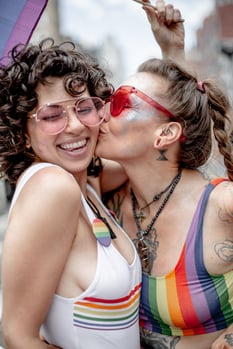 Generation Z has grown up in a completely different cultural climate than their parents did, especially when it comes to gender, sex, and sexuality. The recognition of sexual identities and gender expressions has evolved over time, and so has the acronym that encompasses their community. More than any generation before, Gen Z demands to be seen, heard, and represented in the media and marketing they consume. With their keen eye for inclusivity, this generation isn’t afraid to call out brands for tokenism and inauthenticity.

Although strides have been made to increase Queer representation in the media, our youth panel Generation Wattpad points out in our Keep It Real Report that even modern television falls short on representation for those who have an intersectional experience, specifically of being both LGBTQIA+ and an ethnic minority. In fact, 33% of Gen Z respondents in the U.S. claim that they don’t see their sexuality well-represented in the media.

We asked our group of 400 members from the LGBTQIA+ community, aged 13 to 24, about how they think brands can move away from stereotyping and half-hearted marketing and move towards authentic representation so their biggest target audience feels seen.

Previous generations were hard-pressed to find Queer representation in their favorite TV shows, movies, and other areas of pop culture. And the characters that did identify as LGBTQIA+? They were often portrayed as offensive caricatures of the community, embodying harmful stereotypes that were anything but representative of the communities they claimed to belong to. Simply including LGBTQIA+ stories isn’t enough.

Even as recent as the late 1990s and early aughts, shows like Will & Grace, Sex and the City, and Modern Family leaned on common tropes of gay men being flamboyant and primarily white, and lesbian women being masculine man-haters. “Different people exist and should be shown in all forms, not just the ones that make the most money,” one respondent said.

Knowledge is power, and growing education on the different intersectionalities within the LGBTQIA+ community means more opportunity for authenticity. The buck doesn’t stop at gay and lesbian representation; Gen Z also wants to see “more obscure LGBTQIA+ identities,” like xenogenders, transgender identities, genders other than cisgender, smaller Queer communities like genderfluid and asexual, as well as non-binary people of all ages and ethnicities.

The point is to understand and express that there is diversity within every community, and not everyone within the LGBTQIA+ community has the same lived experience or even relates to each other. 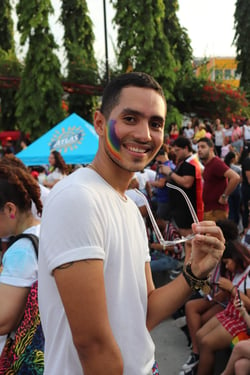 As soon as Pride month hits, it’s common to see major brands suddenly start selling Pride-themed merchandise and changing their marketing materials to rainbow colors (otherwise known as rainbow washing). But Gen Z’s keen eye for authenticity notices the brands that only put in effort for one month of the year and the ones that care about the LGBTQIA+ community year-round.

Take Boy Smells, for example. This brand began as a scent and candle company and branched out into intimates, selling gender-neutral underwear, featuring people across the LGBTQIA+ spectrum in their advertising materials, without using gendered marketing or production. Milk Makeup makes evergreen inclusion a priority, too, by giving 2% of all their sales, year-round, to The Center, a downtown space in New York City providing programming and resources to the LGBTQIA+ community.

More than half of our Gen Z participants said they’ve stopped supporting brands because of the way they handled representation in their marketing and advertising, and 58% said it was because of stereotypical or inauthentic representation. So how does a brand do that? They start by seeing LGBTQIA+ inclusion as a year-round, evergreen commitment that plays a role in all campaigns, both in the marketing materials and behind the scenes in their teams and leadership roles.

It’s easier than you think

Optimism is all around us. Gen Z agrees and are game to put their trust in brands that get representation right. They know that inclusivity starts behind the scenes — in the boardrooms, in the creative studios, and in the offices where the decision-making happens. While building inclusive teams is sometimes a slow process, nailing authentic inclusivity isn’t too hard; it just takes intentionality. It starts with studying and connecting with Gen Z, observing what makes them feel understood, and reflecting that back to them in your marketing, your product, and your hiring practices.

Connecting with your audience, especially Gen Z, starts from the inside-out. Prioritizing your D&I goals and initiatives year-round improves your brand equity and brand consideration with socially-conscious Gen Z. Learn more about how Gen Z’s sharp sense of authenticity is pushing brands for more authentic representation in marketing and advertising.