Gen Z Does Not Have an Attention Span Problem. Your Business has a Content Problem

Gen Z switches content very often. Most people think this is because they have a dwindling attention span. In reality, they just have a ton of really great alternatives.

Ever hear someone say that on average, our attention span is shorter than that of a goldfish? 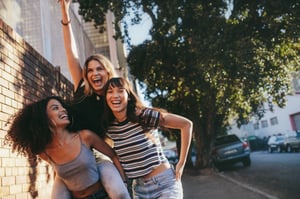 While this is a widely spread idea… it’s not exactly true. It’s a common misconception that, as the digital age continues to evolve, attention spans are getting shorter. And if you think about it for a second, the concept of the “attention-span” is fundamentally flawed. It depends on what we’re doing!

For example, it’s true that an individual today might have a hard time staying focused on a page of Catcher in the Rye, than they would a few decades ago… But that’s only because they can Snapchat their friends any time they want.

One less exposed train of thought is that Gen Z has the same attention span as the rest of us, but they have a tremendous amount of other stimuli that tugs at them. They are constantly curating their life, and can choose between different experiences with little inconvenience. If other avenues are more interesting or engaging, why would they pay attention to boring, drawn out, or underwhelming content?

For example, consider how many people, including ones in the age range of Gen Z, binge-watch whole series’ of Netflix shows over a weekend (up to 140 million hours in a day). If the content quality is high, it has the power to grab a person's attention, hooking them in for hours, sometimes days, at a time.

Marketing projects in this context have paid off. Look back into Hamburger Helper’s April Fool’s Day album. Yes, it’s a parody rap album making fun of itself, and yes, it’s about a glorified side-dish. But it’s funny, it’s got good music, and it’s authentic and honest. This self-effacing tape was second most popular trend on Twitter when it came out, and Gen Z loved it. (It’s tough to say whether or not General Mills knew this ploy would work as well as it did.)

At Wattpad, we partnered with Tongal and Lionsgate to bring attention for their upcoming film, Wonder.

We hosted a writing contest where over 1,000 writers from the US submitted short stories about a time when they chose kindness, which fit in with Wonder’s key themes. Three winners were selected from the contest, and our partners at Tongal brought these stories to life through filmed content. The three short films cumulatively drew in over 1 million views, and the campaign recently just won a Content Marketing award from Digiday.

But more importantly, the reason these three short films got the attention and accolades they did, was because it was simply good content. For example, one of the winning stories, Fuzzy Spark written by Wattpad user Graham Christian Ganahl, drew viewers in immediately because at the root of this short film, was a heart-warming story that really brought out the feels. Bringing in our community into the content creation process and then helping turn these written stories into something greater, is what made it so meaningful to audiences and why it resonated.

In a world of distractions, you’re trying to start a conversation with potential clients and customers.

In the case of Gen Z, they’re completely immersed in media companies with huge budgets and very sensational content. However, sometimes the bigger brands miss the mark, and Gen Z’s not afraid to let them know that with scathing reviews and tweets. It all comes down to creating the best, most engaging content, and starting that conversation as soon as possible. When it comes down to it, every company is a media company.

So while Gen Z has a lot of options to choose from, they certainly don’t have a short attention span. The opportunity is still out there for you to make a strong impression. But one thing is for sure — they sure don’t have patience for underwhelming content.