Vibe check: How Gen Z is changing the way we communicate 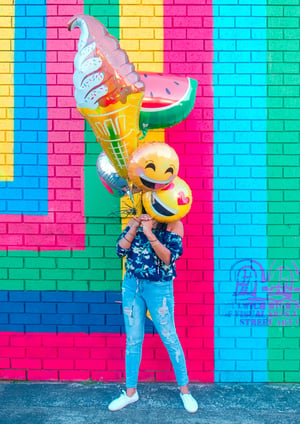 If you’re struggling to connect with Gen Z, your marketing tactics might be considered cheugy  👀.

Something is cheugy when it’s considered try-hard, off-trend or uncool—and it’s just one example of the way Gen Z has created an entirely new language, and new ways to communicate with the world.

By carving out their own unique vocabulary, using emojis to express emotions, and bypassing outdated means of communication to feel more authentically connected, Gen Z is quickly transforming the way we communicate personally and professionally. It’s affecting—and it should be—the way brands are communicating with their target audience. 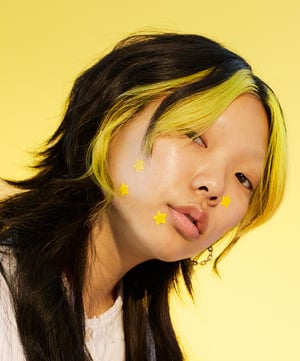 Consider Starface, a skincare line made popular on social media with their star-shaped acne patches. They call attention in a cute, kitsch way to a struggle young people have historically wished to hide, with their motto “don’t hide, decorate!”. Crocs have made a big comeback for their ironically ugly aesthetic, similar to the popularity of dad sneakers. High-end fashion houses like Balenciaga have collaborated with them (remember their Croc stilettos?) and, most recently, the footwear brand worked with KFC to make fried chicken-print shoes. Fashion trends from the 80s, 90s, and 00s are back with a vengeance, playing up the quirky, camp, and over-the-top style that perfectly reflects what Gen Z loves.

These companies and collaborations reflect the simplicity of Gen Z humor. If you’ve spent any time scrolling through TikTok, you’ll know that Zoomers are experts in low-key humour. Nothing is over-the-top, unless it’s done ironically.

The first generation to grow up with a phone, Zoomers are not only used to being constantly connected—they’re also used to being hyper-adaptable, creative and acutely aware of the world around them. Not only do they prefer casual forms of communication, like texting or direct messaging, they also rely heavily on abbreviations, acronyms, emojis and slang to convey meaning.

First thing’s first: everything in short form is bound to capture their attention. Gen Zs are the masters of the TL;DR (Too Long, Didn’t Read) method of communication. Communication with this generation needs to be to-the-point and visual, or you’re unlikely to hold their attention. And if your communication doesn’t use inclusive language (think: gender neutral), you’ll lose them too. 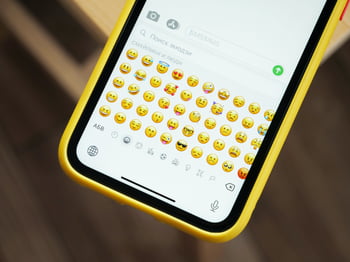 One of the most characterizing aspects of the Gen Z dialect is the use of emojis to communicate. They’re a quick, easy, and informal way to connect, convey emotional meaning, commiserate with one another, and make people laugh. They’ve become an integral part of written language. So much so, that Gen Z have even started to formulate their own emoji language. A single finger emoji 👉 might mean you’re literally pointing to something, but two fingers pointing in together 👉👈could imply feeling shy or bashful.  Gen Z has also replaced the crying laughing emoji 😂 with a skull 💀 or coffin ⚰️ emoji to say “I’m dead” (as in they "died" from how hard they were laughing).

As the next generation to enter the workforce, armed with a strong preference for more casual forms of communication, Gen Z is doing away with email, and forever changing the way we communicate at work.

A massive generational gap in primary work tools exists, according to a 2020 study. While those aged 30 and up were using mostly email to collaborate with colleagues, those under 30 were using Google Docs, Zoom and iMessage. Other tools, like Slack, are becoming more popular in the workplace as they’re more casual, time efficient, and easier to organize and conduct larger conversations. And it has an incredible impact on burn-out rates—stress doesn’t accumulate as quickly or bleed into other areas of life when things like bills, work project notifications and lunch requests are segregated into their own spaces.

Companies are quickly adapting. Instead of encouraging potential customers to sign up for emails, many are turning to text messages. Even dental and doctor’s offices are using phones to connect with patients, and texting rather than emailing appointment reminders. It lends itself to the preferred casualness of Gen Z life. Removing email removes a perceived hierarchy—in a text, we’re all equal. Reach Gen Z by meeting them at their level.

With Zoomers being known as the most authentic generation, the importance placed on authenticity can simplify brand marketing tactics:.