The new rules for writing for Gen Z

How to avoid passive-aggressive punctuation and other lessons from an internet linguist. 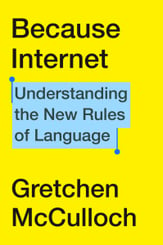 You can learn a surprising amount about Gen Z by observing the way they talk online. And no one is more fascinated with internet-speak than internet linguist and the author of the newly released Because Internet, Gretchen McCulloch. Chris Stefanyk, Head of Wattpad Brand Partnerships, sat down with Gretchen to discuss the new rules for talking to Gen Z online.  Want the 411—or at least, want to know if Gen Z says 411 anymore? Read on!

This interview has been edited and condensed for clarity.

Chris Stefanyk: Gretchen, thanks for joining and taking the time to speak with us! In your new book, Because Internet, you share how our digital world is transforming the English language. One of the key learnings for me was around how rules and expectations around punctuation have changed. I feel like I have been under-using the exclamation mark! What else should brands be keeping in mind?

Gretchen McCulloch: Punctuation is used to convey tone of voice online in a very interesting way. For example, to convey a separation, younger generations will tend to use a new line or separate message, while older generations are more likely to add in periods or ellipses, which to them are seen as more relaxed and casual.

Where you run into issues is when these two ways of separating messages intersect. For Gen Z, the period is a way to add formality or seriousness, but when combined with a non-serious message it becomes passive-aggressive. The difference between receiving a text that says “okay!” versus “k.” is staggering, in terms of its effect for Gen Z. Meanwhile, the ellipses is used to convey there’s something being left unsaid—which could also come across as passive-aggressive in a certain context.

“I can do that…” could mean they can do that but don't necessarily want to.

Moreover the exclamation mark, often used to convey a note of sincerity or cheerfulness, is something that’s been in a constant state of flux. In the 90s there was a trend to use multiple exclamation marks to add to the level of excitement (often combined with the 1 as it shares a key with it on the keyboard i.e. !!11!!!!1!) but this eventually died out. In more recent years, since 2015, we’ve seen multiple exclamation marks coming back, but we've seen this cycle happen before so it’s likely they won't stay around forever.

CS: Fascinating. You also discuss how something similar has happened with hyperbolic words.

GM: Hyperbolic words gradually lose their effect and each generation needs to find something new to convey emotion. For example the word great used to signify much better than good (i.e. Alexander the Great) while today it’s just a bit better than good. Similarly, “awesome” used to be truly impressive but is now used as a synonym for great. One generation’s vivid metaphor becomes another generation’s cliche.

CS: Gen Z grew up online and are comfortable communicating within the character constraints of mediums like Twitter. This has led to a stereotype that they dismiss long-form communication. Do you agree?

GM: The assumption that youth don't read books is not warranted. Texting and other kinds of internet writing actually gives them more practice conveying their thoughts in writing to a particular audience than previous generations. For example, when Gen Z is communicating with their crush they need to think of the nuances punctuation creates. All of this makes them better writers, even if it doesn’t look like an edited book.  But the reality is that similar to casual speaking being the norm over formal speaking, most of society’s written language is informal.

CS: I couldn’t agree more that the assumption is not warranted, and the fact that users on Wattpad spend 37 minutes a day reading on the platform also debunks the myth. According to a new report from Adobe, 83% of Gen Zs are more comfortable expressing their emotions through emojis than a phone call. What can you tell us about the role phone calls and emojis play in Gen Z communication?

GM: This tells me that Gen Z likely hates phone calls more than they love emojis! A shift in norms is happening, where today’s youth find it more acceptable to be interrupted by a text message over a phone call since a phone call demands all your attention while a text is just demanding part of it. Conversely, in the 90s, a survey showed people were willing to interrupt an argument with their spouse to answer the phone, whereas today many people will let the phone ring and assume if it’s important they’ll call back.

Emojis aren’t going anywhere. What’s interesting is that the most popular emojis are faces, hands, and hearts, which correspond to deliberate gestures that provide more context to emotions (i.e. hand on chin 🤔 and rolling eyes 🙄). This tells me their main utility isn’t as a stand-in for every object, but of the nuanced feelings and responses that aren’t easily conveyed with words.

CS: What should brands keep in mind when wanting to communicate with Gen Z?

GM: As styles are constantly changing, there’s no substitute to actually talking to members of this demographic and getting messages vetted to confirm this is how someone would actually communicate.