Wattpad, the global multiplatform entertainment company for original stories, today released its 2018 Year in Review, highlighting the trends and community movements that defined the year on Wattpad. In a year when people around the world are pushing for progressive social change, Wattpad’s global community of 70 million users are breaking new ground in literary representation, creating a safe space online for marginalized voices and their stories.

“Wattpad is home to the most vibrant, diverse, and creative community online,” said Ashleigh Gardner, Deputy General Manager, Wattpad Studios, Publishing. “This year’s trends show how Wattpadders are engaging with real-world struggles in creative ways, building stories and worlds in which everyone can belong. People come to Wattpad to connect over stories. We’re incredibly proud to see how people are not only connecting and creating communities on Wattpad, but also building empathy and understanding for the real-world struggles people face every day.”

Some of Wattpad’s top trends of 2018 include:

Wattpadders are demanding more representation in every genre. Movements to bring more diversity to romance include #MuslimLoveStory, one of the most exciting trends of 2018.

Each month of the year, readers spent an average of 1.7 million minutes reading stories tagged #MuslimRomance, #MuslimLoveStory, and #IslamicLoveStory. This trend represents a 51 percent increase in reading time from 2017.

While reading time in these categories have grown into the millions, uploads are still relatively small, indicating a huge demand for diversity in romance that can’t be found anywhere else. One of the most-loved entries in this growing trend is Glory of the Midnight Sun by rameesharants, which has close to 200,000 reads on Wattpad. 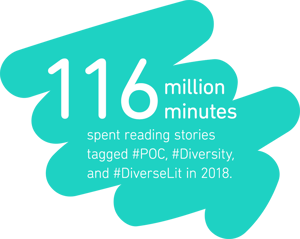 2018 saw another surge in Wattpad community support for characters and writers of color.

Diversity and representation for people of colour grew across a wide variety of genres: Wattpad users spent millions of minutes each month with stories that feature diverse characters in genres like fantasy, sci-fi, werewolf, and mystery. 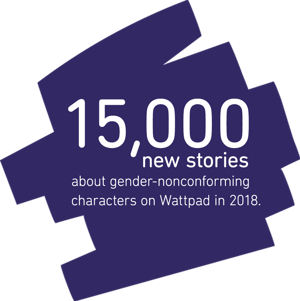 A Spectrum of Identities

In 2017, our Year in Review noted that, each month, readers spent more than 13 million minutes reading stories tagged #FreeTheLGBT in support of more representation for LGBTQ+ characters.

In 2018, Wattpadders created exciting new narratives dedicated to people who identify as #Transgender, #Agender, #Genderfluid, and #Nonbinary. Reading time for stories with these tags saw an increase of 18 percent to 32 million minutes for the year. Uploads grew by 56 percent in 2018, with a total of 15,000 new uploads this year. Categories across the LGBTQ+ community has seen continued growth in 2018, with stories tagged #Asexual or #Demisexual accumulating millions of reading minutes. Combining trans characters, magic, and unicorns, V.S. Santoni’s I’m a Gay Wizard combined the best of all things in LGBTQ+ on Wattpad, for a stand-out story we couldn’t put down.

Women ruled 2018 on Wattpad! While women around the world fought for more rights, recognition, and equality, women on Wattpad turned those struggles into stories.

Reading and writing to highlight mental health issues were important trends in 2018. Stories tagged #Depression, #Anxiety, #MentalHealth, or #FreeMentalIllness, the Wattpad community’s rallying cry to destigmatize mental illness, grew four percent in 2018, averaging 32.6 million reading minutes each month of the year. Uploads also grew, up 53 percent in 2018, for a total of 138,000 new story uploads. One of the most notable examples of this trend was Teenagexnightmare’s Saving Everest--with 16.9 million reads to date--showcasing how storytelling can create a space for empathy and conversation about mental health.

These trends point to the deep empathy and social engagement of Wattpad’s global community, which is more than 70 percent female and 90 percent Millennials or Gen Z. In the US, Wattpad’s community of users is more diverse than the country overall: more than half (58 percent) of Wattpad’s Gen Z users identify as people of color -- well above the 48.5 percent* that makes up the general US population.

Support for diversity and great representation in literature has been a growing trend on Wattpad in recent years. In 2018, Wattpad introduced The Change Makers category in The Watty Awards, the company’s annual writing competition. Dedicated to diverse voices and perspectives, The Change Makers invited entries from marginalized communities, with the goal of elevating all voices in storytelling.